In the perspective of fingerprints, the term 'radial' (loop) refers to the radius - a bone in the forearm that joins the hand on the same side as the thumb. Radial loop fingerprints are characterized by a flow of the pattern that opens in the direction of the radius (or thumb side of the hand) featured with a triradius located at the ulna (pinky) side of the hand. Radial loops are not very common: in general they are less common than ulnar loops, whorls and arches; radial loops are most likely found on the index finger. Probably interestingly, this article presents various clues (in terms of: the volar pads + a complex of genetic populations differences) which indicate that the radial loop represents a fundamentally different pattern compared to the ulnar loop!

In the fields of hand reading radial loops tend to get associated with 'people who do not go with the flow' - refering to the fact that the radial loop represents sort of the opposite of the much more common ulnar loops.

Until 2019 there is no confirmed evidence available that substantiates this assumed 'belief'. What are the facts? 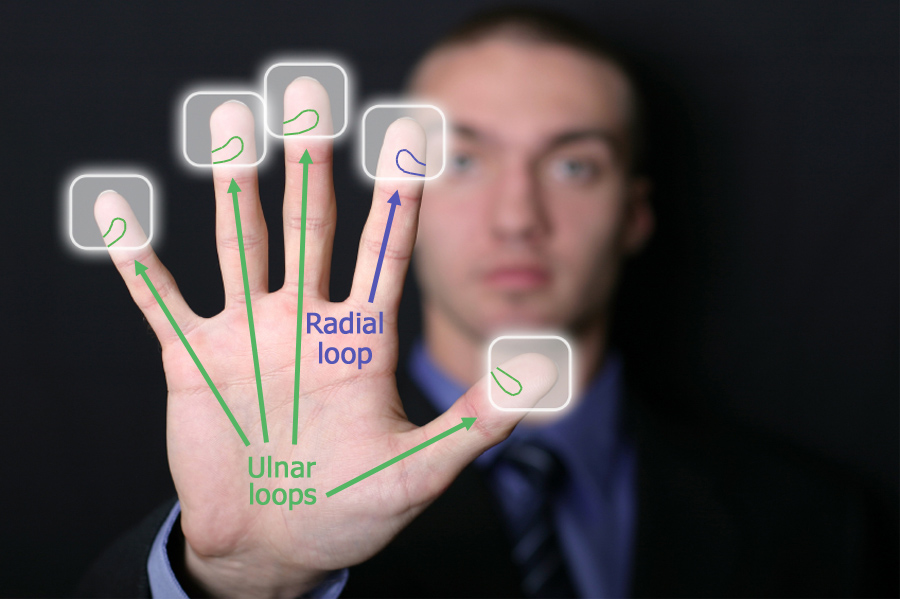 FINGERPRINTS: How to recognize a radial loop fingerprint?

In most regions around the world represents the radial loop (international avg.: 3.0%) the least common pattern of the 4 major fingerprint categories - after in respective: the ulnar loop (50.0%), the whorl (41.0%), and the arch (6.0%) - percentages taken from the article: The Fingerprints World Map (in nearly all international populations the radial loop percentage is less than 10% of the ulnar loop percentage!).

• RADIAL LOOP FACT 2: Radial loops are by far most common on index fingers (in humans)

The 6 most common fingerprints combinations with at least one radial loop on any finger (6 out of 6 include a radial loop on the index finger) are listed according estimated order of prevalence below:


Indicative percentages (derived from 30 international populations around the world) for the presence of radial loops on the individual fingers in the general population are: 1.3% for the thumb, 11.35% for the index finger, 1.4% for the middle finger, 0.7% for the ring finger, and 0.5% for the pinky fingers. The picture below provides an overview of the distribution for the 4 major fingerprint types among male- and female populations from in respective: the US, UK, China, Iran & Nigeria.

"Radial loops in chimpanzee fingers are almost confined to digit I [thumb], contrasting with the characteristic concentration of these patterns on digit II [index finger] in man". 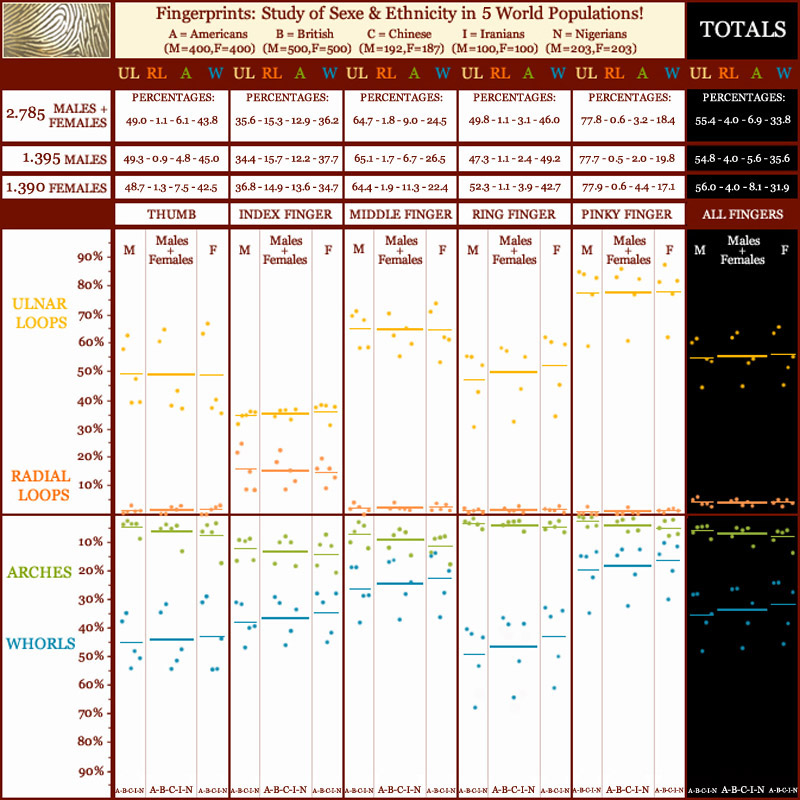 Fingerprint pattern configurations correlate with the location-, shape- and size of the so-called prenatal volar pads (= swelling of mesenchymal tissue in the 3rd month of pregnancy). And skin ridges are understood to become manifest in the surface of the skin due to tension & pressure forces in upper layer of the skin.

Volar pads typically tend to manifest as intermediate pads with a location slightly shifted towards the radial (thumb) side of the hand - which represent the typical features that get associated with the most common major category: ulnar loops. However, sometimes the location of the volar pad is shifted towards the ulnar side of the hand - which results in a radial loop. 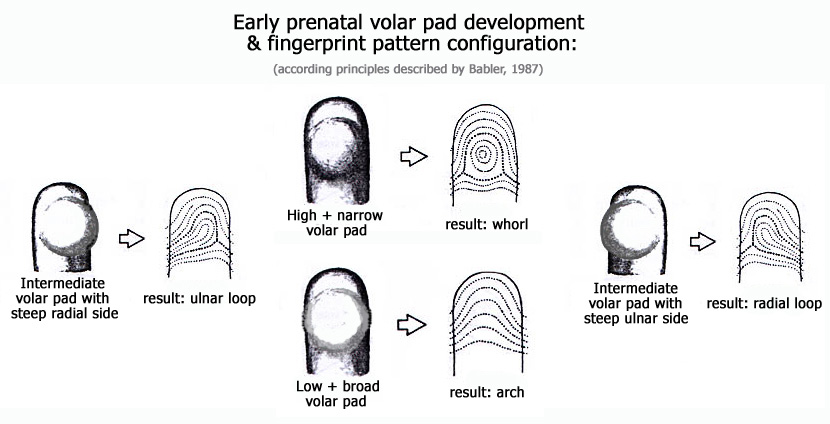 Combining the statistics in the map below + the data featured inside the fingerprint world map, the result shows that there is particularly one region in the world where the highest percentages of radial loops are usually found: north-west Europa (in the next paragraph more details specified for males and females are presented inside the table). 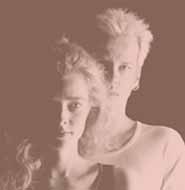 Fingerprint statistics around the world point out that the prevalence of radial loops also varies between the sexes; these are the typical patterns (see for example: Cummins & Midlo in 'Finger prints, Palms & Soles'; 1943, p.273):

Just like whorls, radial loops also typically have a higher prevalence in males (confirmed in 9 out of 10 populations displayed below); however it is important to be aware that this pattern is likely only to manifest clearly when at least one of the other three patterns (listed above) is present.

• RADIAL LOOP FACT 6: Radial loops have a different distribution across the fingers in genetic disorders


In the general population radial loops typically show a uniform distribution featured with a sharp peak on the index finger. However, in genetic disorders the distribution is often very different. 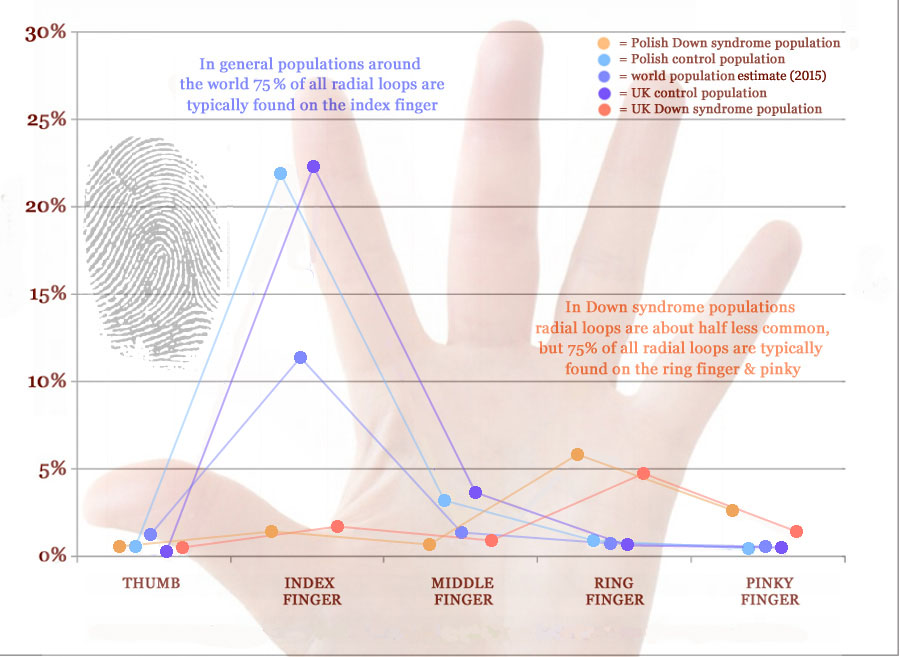 Studies beyond Down syndrome have as well indicated that many other inborn chromosomal disorders also tend to display a different distribution of radial loops across the five fingers; the sharp peak at the finger is missing in all of the following syndromes:

NOTICE: Various studies have reported results which suggest that a radial loop on the index finger could represent a small clue towards high intelligence (more details see: Iran, 2009; US, 1967).

In general radial loops have so far only in relatively rare cases been associated with some non-genetic diseases; one of the few examples is the rubella virus. Also, abnormal distributions of radial loops has been reported for Alzheimer disease (where radial loops on the fourth and fifth digits were more prevalent in patients with senile dementia of the Alzheimer type [SDAT]).


[This paragraph is still under construction]

Radial loops on both index fingers are in the studied population more than 2 times more common in the extraverts (11.1%) than the introverts (4.5%). More details are presented inside the article: Phantom Pictures for the Hand in Extraverts & Introverts. 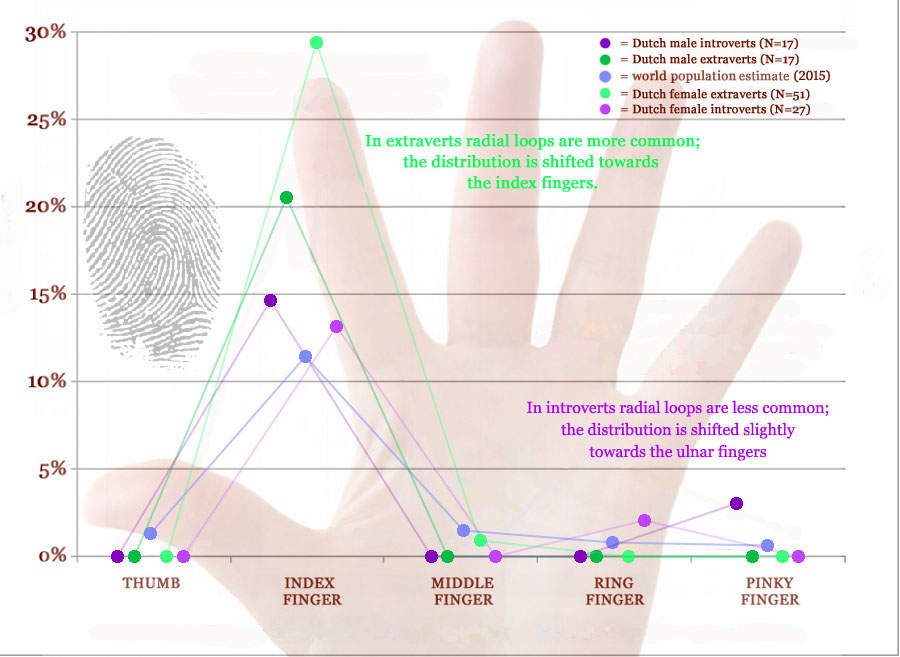 - Radial loops & the Big Five factor Neuroticism -
In a Dutch population radial loop fingerprints turn out to be clearly more common in high scorers on the Big Five dimension Neuroticism, where the 5-fingers average (4.41%) is almost 65% higher than in low scorers (2,68%) - see picture below. 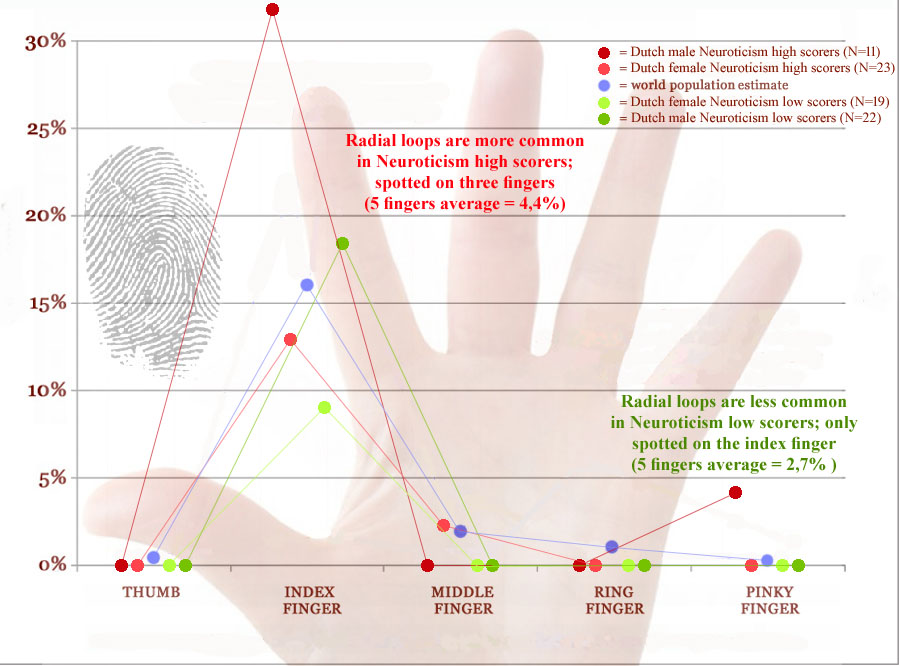 NOTICE: An analysis for the Big Five dimension Altruisim has indicated that for males and females together the distribution of radial loops across the five fingers does not vary from the normal distribution in high- or low scorers on Altruism.

NOTICE: Down syndrome (the most common trisomy syndrome) is know to exhibit high numbers of ulnar loops only and arches, radial loops and whorls are usually all lower compared to normal populatons - therefore there is no apparently relationship visible in Down syndrome regarding how radial loops relate to arches and whorls.


An overview of well-known people who have arch fingerprints (assessed according the FBI system): 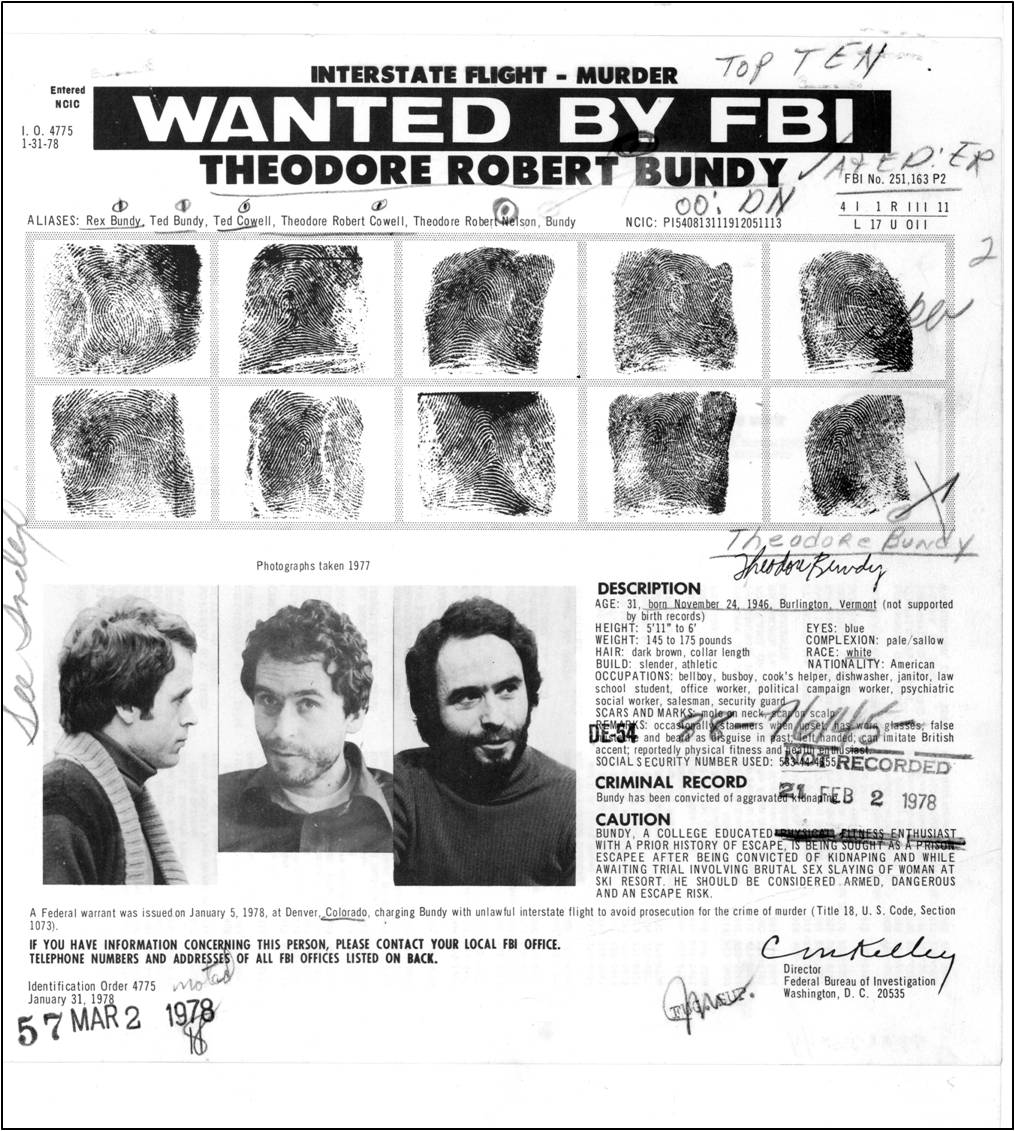 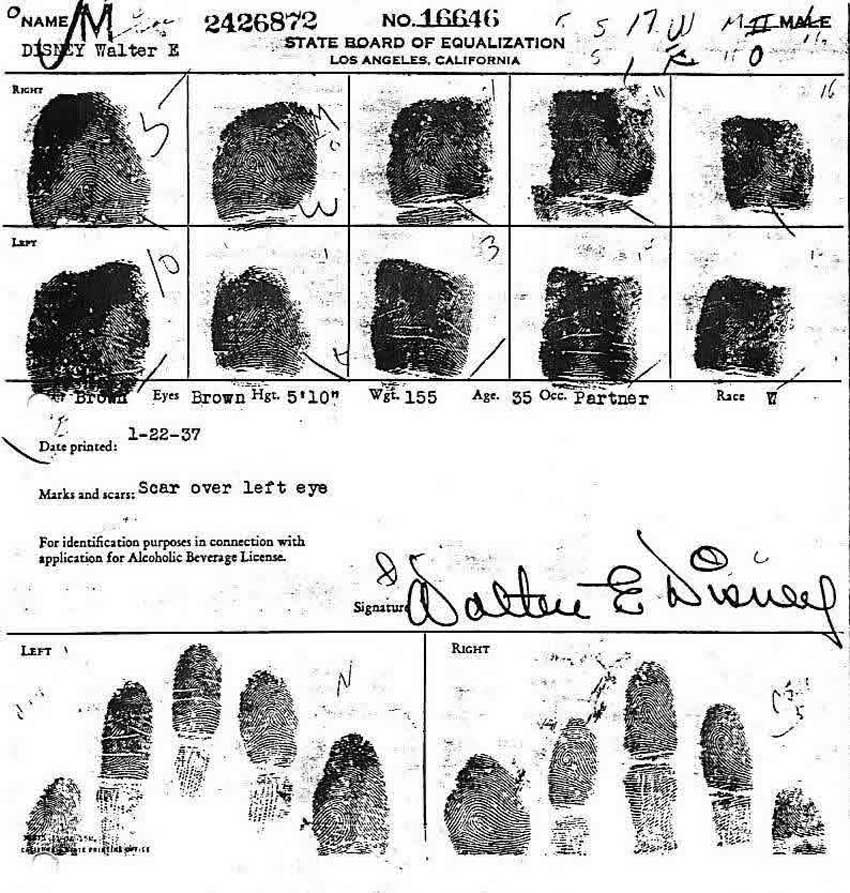 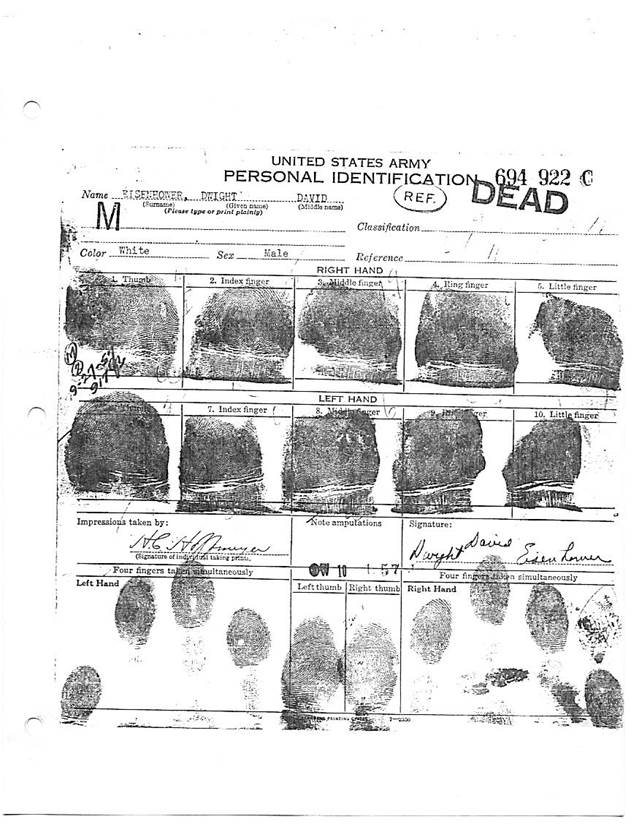 Barack Obama senior (father of the US president): For statistical purposes - the following famous persons do NOT have radial loops: What do hand readers say about arch fingerprints?

Some of the hand reading experts in the Global Hand Reader Network have presented interesting contributions on the 'radial loop' inside their book(s):

"Radial loop - Whenever you find a radial loop on a digit this is remarkable and will affect the person's consciousness strongly. The radial loop indicates such an extreme mental state of openness to others that they lose sight of their own desires. Radial loops create a compulsion to prioritize others needs over one's own, and an insecure, unstable, hyper-responsive personality."

"It is the radial loop owners' keen hyper responsiveness that make them different from people with ulnar loops. Those with ulnar loops are more tribe oriented 'followers', whereas people with radial loops have more versality and ingenuity. Radial loop bearers have a strong emotional need to appear to co-operate, while their vision and imagination could well put them in leadership positions."

TRANSLATED FROM DUTCH LANGUAGE: "A radial loop belongs to a person who has his own ideas and his own way of working, especially if he wants to start something new. He's open to suggestions from others, but only if these correspond with his own interests or ideas. He likes to take initiative, and tends to do this by putting his own interests above those of others."