FINGERPRINT DISTRIBUTIONS & HAND DIAGNOSTICS: HOW TO UNDERSTAND FINGERPRINTS ON THE FIVE FINGERS?

What else can fingerprints reveal
beyond your identity?

It's not a public sectret: every single fingerprint has tiny characteristics that are unique to each person. But not all aspects of a fingerprint are unique! For example: fingerprint pattern types vary significantly among males and females; and fingerprints also tend to vary among the populations around the world. But what else can fingerprints reveal? Diet, lifestyle, disease & personality can approximately be determined via fingerprints. This section also includes a new approach for assessing the significance of the combination of the 5 fingerprints in any hand!

In 1880, Dr Henry Faulds, a surgeon in a Tokyo hospital, published his first paper on the subject in the scientific journal Nature, discussing the usefulness of fingerprints for identification and proposing a method to record them with printing ink. But his ideas were rejected at that time.

And it took another 12 years before Sir Francis Galton published in 1892 a detailed statistical model of fingerprint analysis and identification and encouraged its use in forensic science in his book Finger Prints. Galton calculated that the chance of a "false positive" (two different individuals having the same fingerprints) was not higher than about 1 in 64 billion. ...more

THE F.B.I. APPROACH TO FINGERPRINT TYPS:

In the 20th century researchers have discovered that fingerprints can reveal so much more beyond theme 'identity'. Because studies have unvealed that fingerprints reveal clues that relate to other themes, including: sexe, race, diet, lifestyle, and disease. ...more

And early in 2016 a new perspective became available involving how fingerprint patterns bare the potential to correlate most likely with personality & temperament. ...more 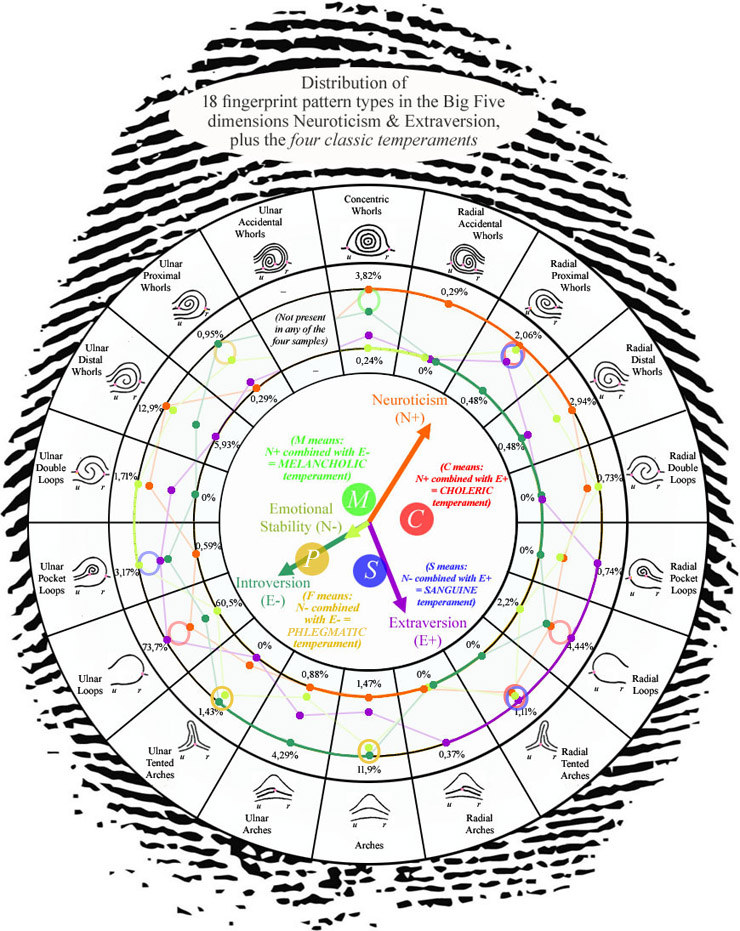 What will be the outcome of the 21 century? While fingerprint pattern type distributions have been studies on the individual fingers, researchers have presented few attempts focussed on studying the significance of the 5 fingers together.


What is in 2019 the state of knowledge about fingerprints (palmar dermatoglyphics) & how did this knowledge develop in time? ...more.