In 1953 David C. Rife (Institute of Genetics and Department of Zoology, Ohio State University) presented a fingerprints world map displaying the distribution of the so-called 'pattern index' around the world. What can we learn from this world map today? Is it still valid? A brand new world map presents the answer - in short: sure! 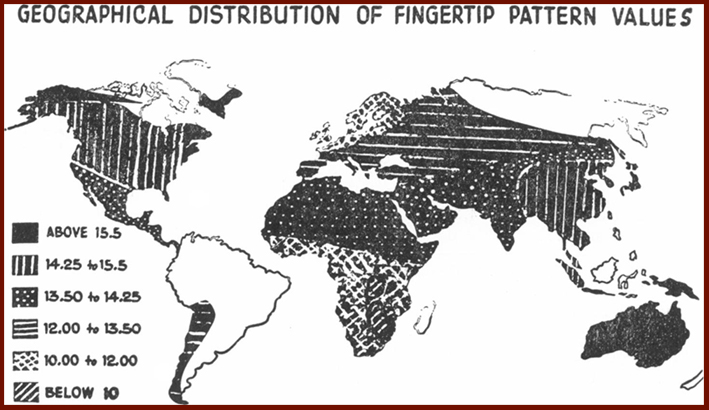 The fingerprint world map according C. Rife (1953) above displays the distrubution of the 'pattern index' (pattern intensity) - which was defined by Harold Cummins (Cummins and Midlo, 1943) as follows:

NOTICE: In 1977 W.J. Babler summarized data for about 120 populations around the world; the data presented by Rife (1953) and Babler (1977) has been combined inside the brand new world map that is presented below (only the data for the eskimo populations in northern america varies significantly from the 1943 world map) - click HERE for larger version!

The highest 'pattern intensity index' (see definition between world maps above) in the world is found in populations located in the continent Oceania (including Australia), where endigenous populations usually have a average 'pattern index' above 15.4. Oceanian populations usually have whorls to represent the most common fingerprint category, and in many (east) Asian countries a likewise tendency is seen, while in most other regions around the world loops are clearly most common.

The lowest 'pattern index' in the world is found in populations located in the south of the contient Africa, e.g. in Bushmen & Pygmies are arches likewise commons as whorls - resulting in an average 'pattern index' that may even drop below 10 (while in nearly all populations around the world whorls are always much more common than arches).


The continuation of this article answers the following questions: 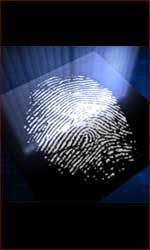 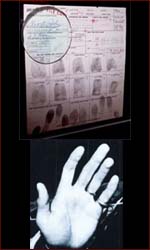 What are the most important fingerprint types?

Since 1985 researchers have continued to use various other approaches to classify the most common fingerprint variants. Usually the 4 most common variants of these 8 types are recognized to represent the major categories (arches, radial loops, ulnar loops & whorls). Because these 4 most common variants are relatively easy to discriminate from eachother, the continuation of this article is focussed on the prevalence of these 4 major variants around the world.

Which is the most common fingerprint type in the world?

The tables below display various aspects of fingerprint distributions for 32 countries around the world; in 28 out 33 populations (ULNAR) LOOPS represent the most common fingerprint pattern category. Outside Oceanie only the populations from China & Malaysia show a tendency for WHORLS to be more common than LOOPS - which confirms the tendencies seen in the two fingerprint world maps (presented at the top of this article).

Regarding the 1943 world map the 'pattern index' for Botswana, China, Ellice Islands, France, India, Israel, Kenya, Korea, Malaysia, The Netherlands, New Zealand (Maoris), Nigeria, Russia, Tanzania & Yemen is exactly within the expected range; and for Algeria, Costa Rica, England, Guatemala, Iran, Iraq, New Guinea, Sri Lanka, Sweden, Thailand, Venezuela & Vietnam it is (very) close to the expected range. For Indonesia, Japan & Korea the values are clearly below (though not far away) the expected range; the 'pattern index' for the US is significantly lower and not meeting the expectations according the 1953 map, but it does meet the tendency seen in the 1977 world map. Only for Argentina (& Malaysia) the value is much higher than then tendeny displayed by both the 1943 en 1977 world map.

NOTICE: Interestingly, only for the populations from Argentina, England, Guatemala the 'pattern intensity index' is (slightly) higher than the expected range; but in many countries the 'pattern index' is lower than expected. This could indicate... that during the past decades the percentage of 'whorls' has become slightly smaller in many populations around the world - as whorls have the highest weight in the 'pattern index'! However, there is no clear evidence that this tendency is more obvious for the more recent samples (4 out of 9 samples in the 21 century still follow the guidelines presented in the map, but none of the other 5 samples is higher than the expected range: all those 5 samples are lower).

When this tendency is confirmed in the future this could make sense in the perspective of Darwin's evolution theory - because WHORLS are already are recognized to be less common in humans than in primates!

The reported results around the world (below) show a very high correlation with the 1953 & 1977 fingerprint world maps! The percentages indicate that LOOPS (ulnar + radial) are seen in a majority (50%) of all fingers around the world; this tendency is sort of confirmed in 28 out of the 33 populations. WHORLS are only sometimes more common than loops; only 5 out of 33 populations have more WHORLS than LOOPS, but for WHORLS the percentage only in 4 populations higher than 50%, for: Ellice Island, New Guinea, New Zealand (Maoris) & Malaysia.

Finally, it is remarkable that almost half of the populations show (clearly) lower percentages than expected according the 1953 Fingerprint World Map. Only a few of the older samples (Argentina sample from 1978, England: samples from 1943, 1964 & 1983) show percentage above the expected range according the map.

* Percentages are derived from a continental variation analysis.

NOTICE: Seven out of the 10 most populous countries in the world today are represented in the table above. For Brazil, India, Nigeria & Russia the statistics are within the expected range according the 1953 Fingerprint World Map, but for almost half of these most populous countries (China, Japan & US) the statistics indicate that the number of WHORLS might have dropped there during the past decades; all data together involves 172,673 subjects.


What is the most common fingerprint distribution in the 10 fingers?

The distribution of fingerprint types varies significantly among individual fingers. In order to identify the most typical distribution in among the 10 fingers, we can simply take a look at the most common fingerprint pattern type in each of the 21 populations.

The table below presents an overview of the most common fingerprint types on each of the 10 fingers.

NOTICE: The table below displays the most common fingerprint types for each single finger among the 21 international populations.


* Resulting from weights according world population statistics in the year 2000.

The results in the table show that in all populations in each of the 10 fingers the ulnar loop or the whorl is always the most common fingerprint pattern type in any country around the world.

In both the right hand and the left hand the ulnar loop on the pinky is found in a large majority of 21 out of 23 populations; this trend is only not seen New Zealand Maori and Ellice Islands people. A likewise trend is seen in the middle finger, though in the populations of New Zealand Maori, Ellice Islands and New Guinea the whorl is more common on the middle finger of both hands.

This makes the whorl the most dominant pattern on the ring finger, the thumb & and the index finger in far most populations .

Interestingly, this also implicates that a common similarity between the 23 populations is a high prevalance of the so-called 'universal distribution' for the 10 fingers:

Usually this distribution belongs to the TOP 10 most common fingerprint combinations seen around the world:

Finally, it is interesting to notice that both the 'white' (and 'black') populations shows by far the largest variation compared to this 'universal distribution':

Read more about: the role of fingerprints & dermatoglyphics in Multi-Perspective Palm Reading. 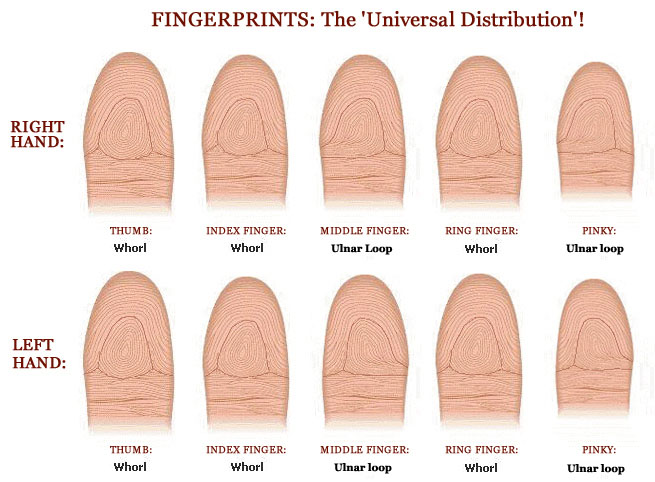