What is the 'Dermatoglyphics Multiple Intelligences Test' (DMIT)? DMIT is an appealing commercial product which suggests that 'multiple intelligences' (read: talents) can be assessed from dermatoglyphics & fingerprints. During the past years DMIT became a popular niche in some Asian countries with the use of smart marketing techniques focused on especially young parents, who are often insecure about their child's future. Is DMIT really the reliable & scientifically validated test that it claims to represent?

At some locations (e.g. in Chinese cities) DMIT became banned after parents started complaining about e.g. the reliability of the DMIT results + doubts regarding the validity of various DMIT-claims. Also, incidental reports have been noticed from various sources where DMIT became described as a franchise scheme fraud/scam. The objective of this article is to demonstrate the construction of the DMIT concept; also, background info is presented regarding the origins of DMIT, featured with a deeper analysis focused on in specific the DMIT claim regarding 'Musical Intelligence'. Finally, various sources are recommended for further reading.

Professor Lin of WellGene Sciences Inc. claims to have started DMIT in 1994 in Taiwan and claims are made that DMIT is a patented scientific system to determine an individual's 16 Multiple Intelligences.

Unfortunately, DMIT can also be recognized to represent a speculative construction that is built on basically four (pseudo-scientific) hypotheses:

1 - DMIT is built on the 'multiple intelligences' hypothesis.

The concept of 'Multiple Intelligences' was introduced in 1983 by developmental psychologist Howard Gardner in his book 'Frames of Mind: The Theory of Multiple Intelligences'. However, there are many arguments which suggest that Gardner's theory is not built on empirical evidence and is actually recognized as an example of pseudoscience; Wikipedia e.g. summarizes: 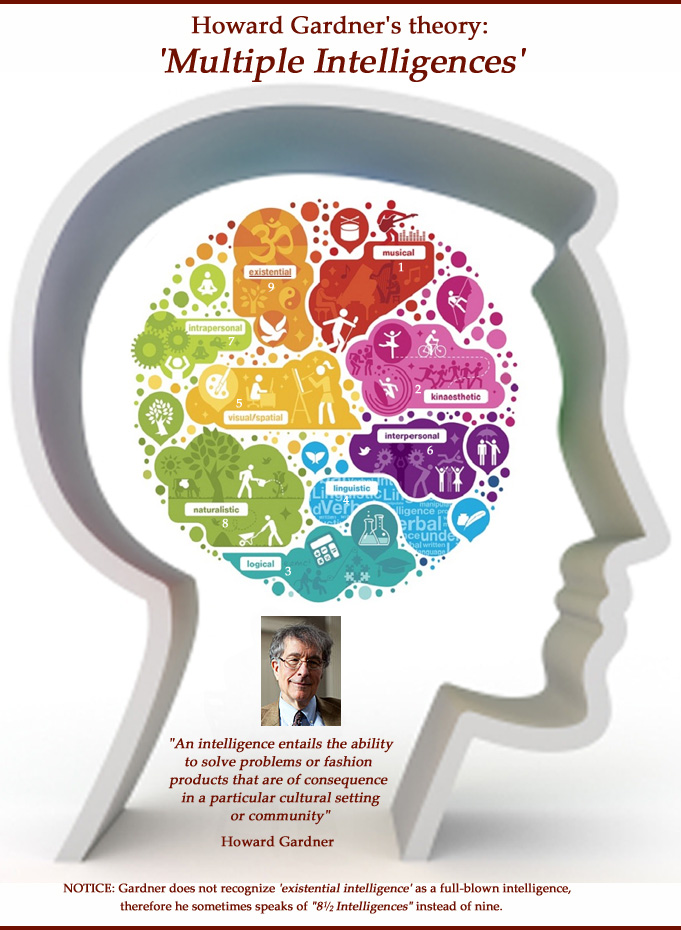 2 - DMIT is built on the 'left-brain vs. right brain lateralization' hypothesis.

The concept of the 'left-brain vs. right brain lateralization' became popular based on e.g. outdated findings from the 1970's and neuropsychologist Roger W. Sperry's 'split-brain experiments'. Unfortunately, also this theory has a lack of support from brain research and is today known as an unfounded example of pseudo-science; a neuroscientists explains:

"The idea that the left side is "logical and analytical" and the right is "intuitive and creative" seems to be natural law. In fact, it may be the poster child for pseudoscience - something that looks like science but isn't.." 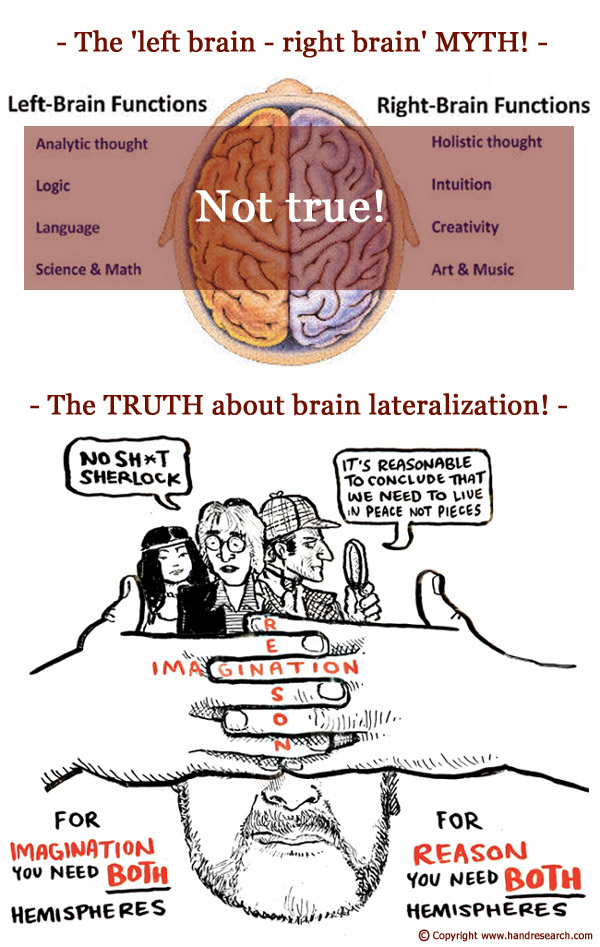 Unfortunately, this theory can also be recognized to represent example of pseudo-science for various reasons; e.g. because brain research today points out that all five fingers have the strongest connection with only a small parts of the brain that is known to represent the so-called 'primary motor cortex' and the 'primary sensory cortex' (both are located at the central sulcus, which separates the frontal brain lobe from the parietal brain lobe). 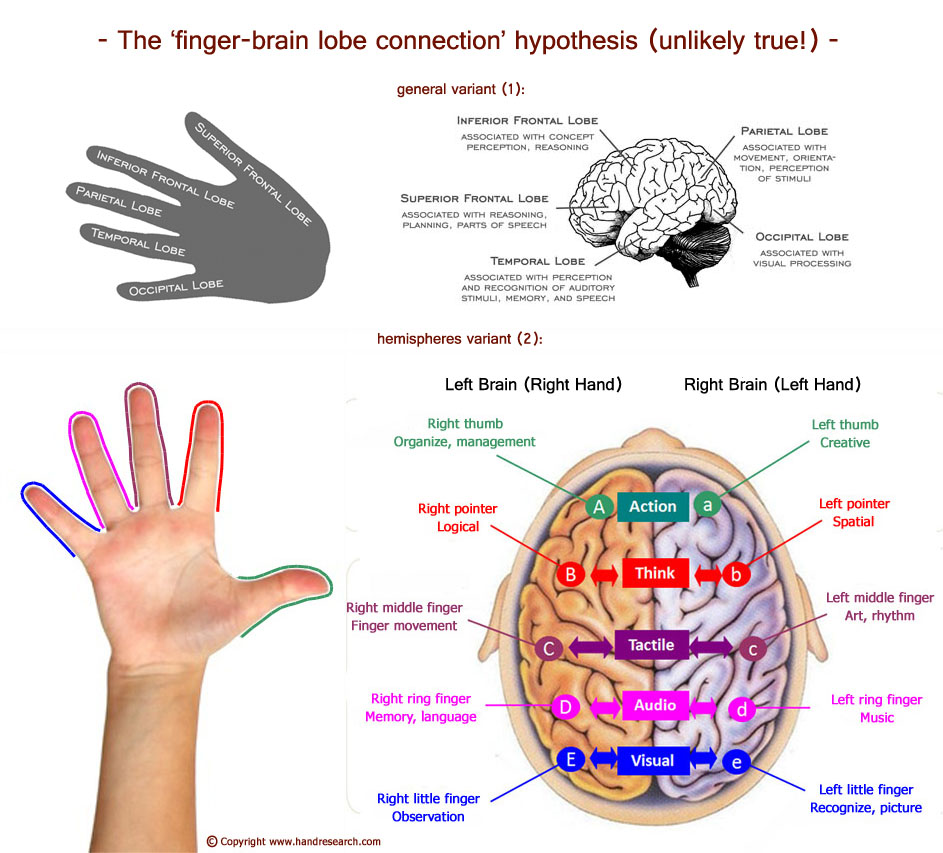 The origins of the 'fingerprint predicts behavior' can be traced to the field of palmistry. US Palmist Edward D. Campbell describes in his very informative 1998 article 'Fingerprints & Palmar Dermatoglyphics':

"Noel Jaquin began to speculate about the psychological connections of fingerprints and individual subjects in print in 1933 as he wondered whether the whorl pattern, then commonly found on the prints of certain types of criminals, indicated some defect of moral perception that he would attribute to some psychological deficiency."

Unfortunately, there is no scientific evidence which provides evidence for the idea that fingerprint patterns (such as: whorls, ulnar loops, radial loop, tented arches & arches) correlate with behavior; so far there are only studies available where results indicate that 'fluctuating dermatoglyphic asymmetry' may correlate with some aspects of behavior (usually due to developmental instability), however one should not misinterpret such findings as a clue that individual fingerprint patterns themselves also correlate with genetically determined talents or behavior.

The illustration below is a compilation of illustrations presented by Encycligent (which associates with Professor Lin's work). 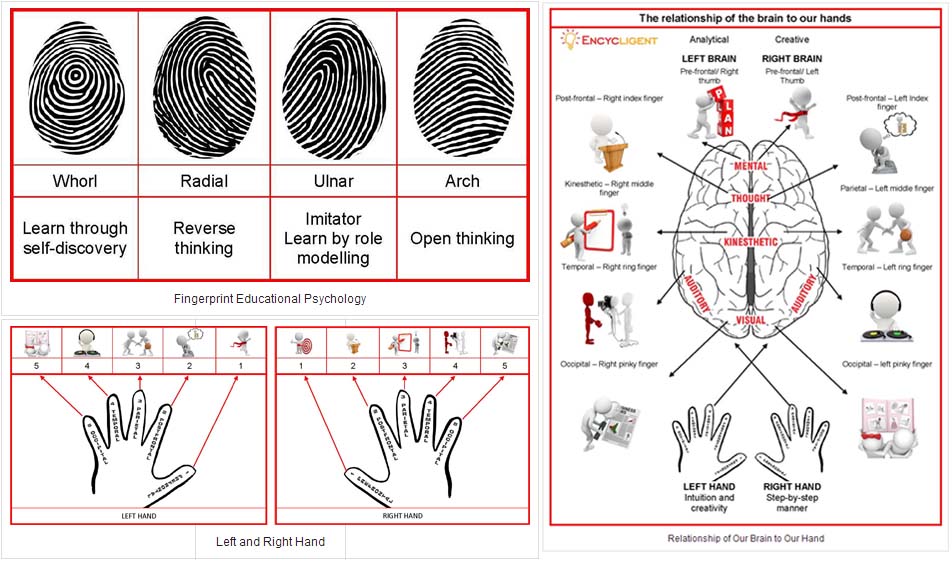 - Major contributors to the DMIT theory! -

The following people are often named to represent major contributors regarding the underlying theory of the 'Dermatoglyphics Multiple Intelligences Test': 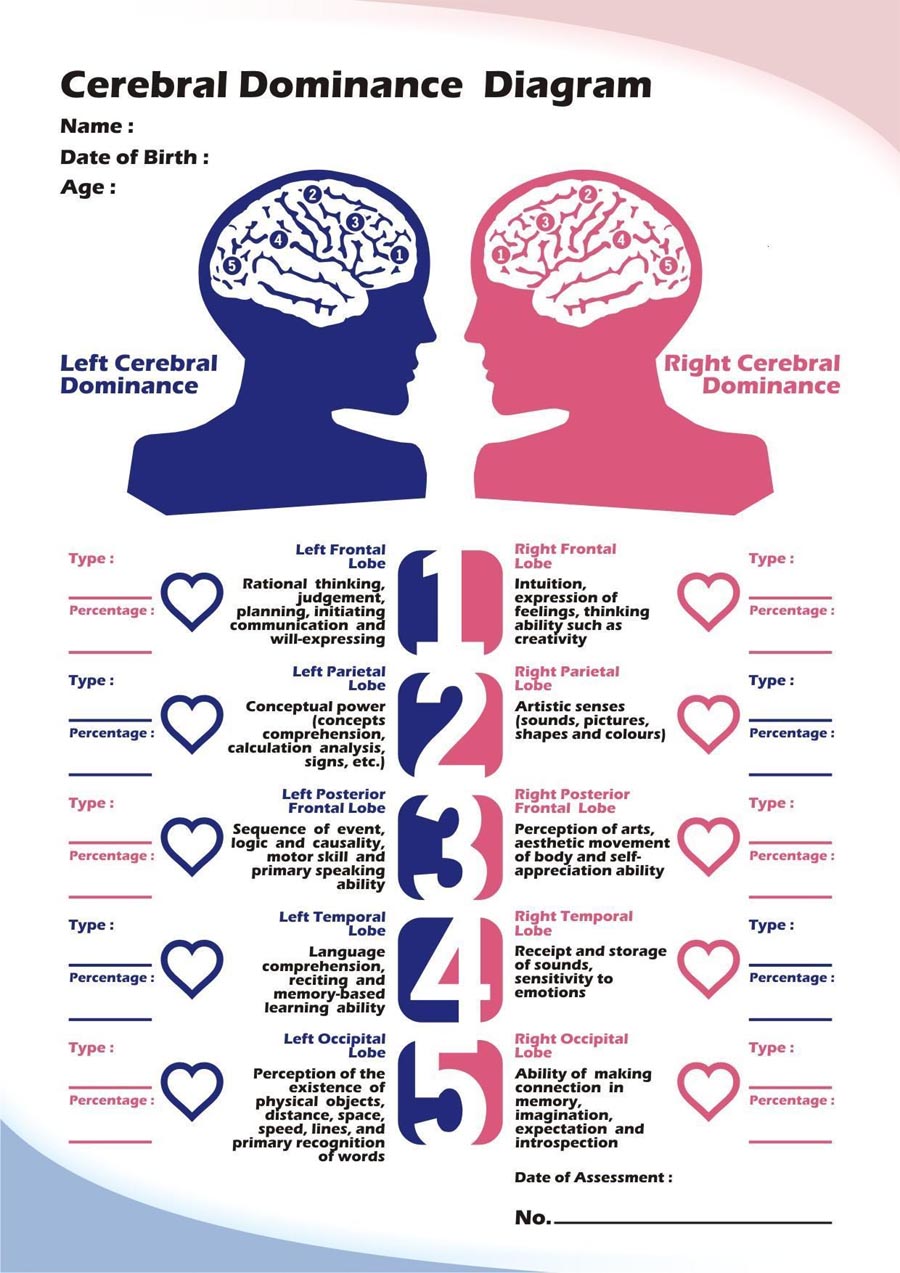 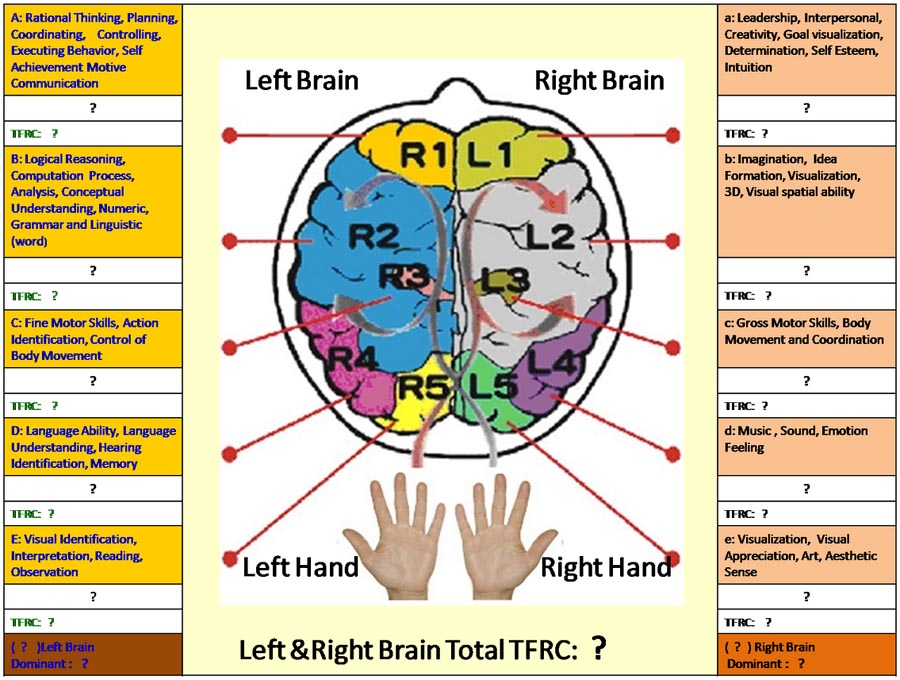 According DMIT 'Musical Intelligence' manifests in the hand through the left ring finger and is assumed to correlate with especially the right temporal brain lobe (see e.g. Esther Cheang's picture above).

However, a closer study of Howard Gardner's work reveals that his perception regarding how music correlates with the brain tends to focus on the right hemisphere as well; however, in june 2012 Gardner published a paper on his blog which suggests that musical skill is not "localized" in a particular brain lobe:

"A brief consideration of the evidence suggests that musical skill passes the other tests for an intelligence. For example, certain parts of the brain play important roles in perception and production of music. These areas are characteristically located in the right hemisphere, although musical skill is not as clearly "localized," or located in a specifiable area, as natural language."

Actually, according the sate of cognitive neuroscience today research points out that music skills actually require the involvement of both hemispheres: "Music is also processed by both the left and the right sides of the brain."

Additionally, the truth is that various brain lobes from both hemispheres are involved with the process of music:

Also, Walter Sorell pointed out in 1968 that long ring fingers have been linked with musical ability for many years; during the past few decades John Manning described that this old finding has been confirmed by 2d:4d digit ratio studies which indicate that musicians tend to have by average a (slightly) lower index- to ring finger length ratio. Unfortunately there are no scientific studies available at all which confirm that fingerprint ridge counts (or dermatoglyphics) correlate with 'musical ability'.

Conclusion: the correlation between musical talent and the ring finger was already known long before DMIT, and so far there is no (independent) evidence which confirms that this correlation is more significant for the right ring finger than for the left ring finger. Therefore this aspect of DMIT represents likely just another glimp of a pseudo-scientific theory.

During the past few years various independent reports have been noticed which indicate that the marketing techniques used to promote DMIT have been questioned not only regarding it's validity, but also regarding it's moral standards. The marketing techniques used to promote this (commercial) product is often focused on young parents in Asian countries which are known for relatively high competition between children to get access to education & career opportunities.

- Prof. Narendra Nayak shows how DMIT also gets abused combined with other pseudoscience - India (9-21-2017):
'DMIT "... charts out the future career of the child" (false claim):

- Krishna KumariChalla, A Ph.D. in Microbiology describes why DMIT is a scam - India (6-3-2016):
'Is the DMIT (Dermatoglyphics Multiple Intelligence Test) test a scam or real?

- Debate between scientists and DMIA-people (Dermatoglyphics Multiple Intelligence Analysis) - India (6-1-2016):
'DMIA: Pseudo-science catches the imagination of Indians more than anybody else in the world!

- Frauder calling fraud: "This is to bring to the notice of general public that there are many people with fraud intention in DMIT industry" - India (6-29-2015): 'Dermatoglyphics Fraud'

On september 20, 2017 has written in a letter (see below) that he does not endorse DMIT. Also, he has even stated that he does not endorse any sort of 'Mulitiple Intelligences' (MI) test; this statement can be understood well in the perspective of the fact that in 2000 Gardner had already acknowledged that there was "little hard evidence for MI theory".

Also, after Sternberg and Grigerenko had stated in 2004 that there were no validating studies for multiple intelligences, in the same year Gardner asserted that he would be "delighted were such evidence to accrue", and admitted that "MI theory has few enthusiasts among psychometricians or others of a traditional psychological background" because they require "psychometric or experimental evidence that allows one to prove the existence of the several intelligences."

This basically means that cognitive neuroscience research does not support the theory of multiple intelligences.

Letter by Howard Gardner: he does not endorses DMIT (nor any other test for 'Multiple Intelligences' assessment): 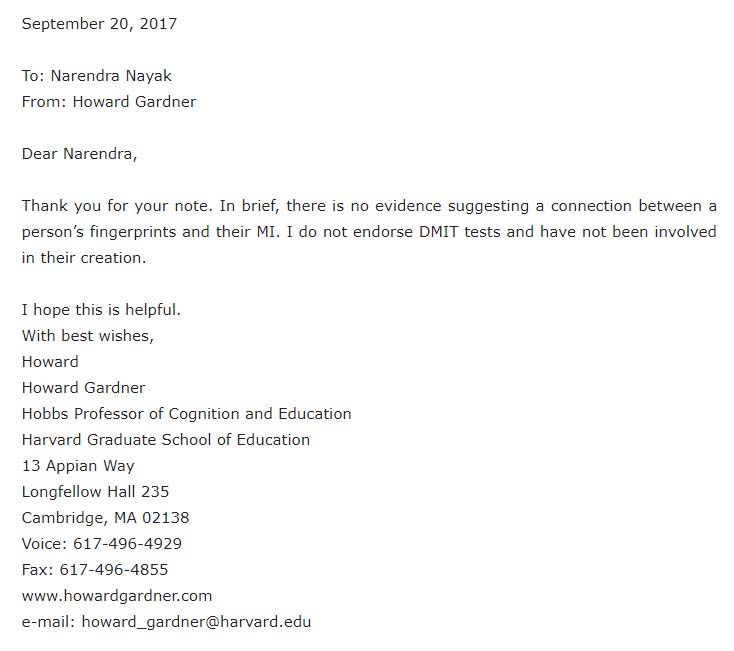 HANDS IN THE NEWS